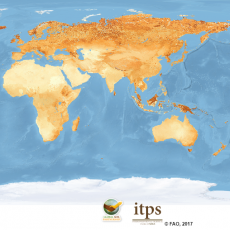 From our point of view, the main principles are:

However due to the vast territory and a huge variety of natural conditions of Russia the map-making of a carbon reserve map in accordance with the declared program principles of the GSOC17 is possible only with the coordinated cooperation of the efforts of the teams from many scientific and agro–industrial organizations.

The Soil Data Center of the M.V.Lomonosov Moscow State University is the coordinator of map–making of a carbon reserve map of Russia. The Soil Data Center of Moscow State University initiated the exchange of different–scale soil data within a distributed network of regional soil data centers. This network in Russia is currently in process of formation.

All operations are carried out on the basis of the «Information system Soil–geographic database of Russia» (ISSGDB) in accordance with the ideology of the FAO Global Soil Partnership program.

More detailed information on the implementation of this initiative in Russia is given in the section «Map of organic carbon stocks in the 30-cm layer of Russian soils».