The basic tendency of modern soil science is using of information technologies for data processing and soil inventory and application of the achievements of science to practice.

The creation of unified international soil-information space is the most common idea of modern soil science. The participation of the largest state in the world - Russia with its 11% of the Earth's land area is inevitable for the implementation of this idea.

A huge amount of data have been accumulated by Russian scientists for more than a century of soil science history. There are single subject soil information systems, databases, digital maps and especially data on paper, i.e. archival depository stock including dissertation archive, soil and other maps of different times and scales, covering both the whole country and single regions.

The concept and ideology of the national SGDB, its content and structure were developed at the first stage. The main principles, goals and objectives of the creation of the Russian SGDB were enunciated at the same time.

The basic principle of SGBD operation is the principle of constant supplement, openness and accessibility of the database. Different soil information is aggregated on the basis of digital maps using modern GIS technologies. The largest scale of the digital map for the entire territory of Russia, created according to a common methodology on the basis of a common legend, is chosen as the main scale of the database.

The basis of the structure consists of three blocks, i.e. geographical database, profile attribute database of measured properties and a block of calculated parameters (statistical and model).

Software release started filling profile attribute database, as well as continued development and filling of the cartographic unit. Soil-DB software allows anyone who wants to take part in the formation of SGBD to register on the site, fill in the soil description cards and send them to a central server via the Internet. Special forms are developed for entering information. The User Manual, other project materials and the Soil-DB software are available on the website db.soil.msu.ru.

A distinctive feature of the project is realized possibility to attract a wide range of soil scientists and related specialists to the filling of SGBD. The project has been presented by numerous reports and publications to inform the scientific community.

Test version of Soil-DB software was presented at the V Congress of V.V.Dokuchaev Soil Science Society in 2008 Data on the morphological and chemical-physical properties of individual representative soil sections with a geographical reference, providing the ability to determine their location on a cartographic basis at a scale of 1:2 500 000, are needed to the filling of SGBD. The President of V.V.Dokuchaev Soil Science Society S.A.Shoba called upon to all soil scientists and related specialists possesing such data to fill up the Soil and Geographic Database of Russia.

Specialized scientific and information resources were created to work on the Project: db.soil.msu.ru.

In 2013 the Information-analytical system on the basis of the Soil-Geographical Database of Russia (IS PGBD RF) was created. The system is a software and web-site (soil-db.ru) with soil profiles data. It is available in local and network versions. The local version of system allows to upload data to web-site, to conduct expet examination of data reliability and decide whether to include information in the database. The network version allows to correct input data using an interface that is completely similar to the software version both in appearance and in set of classifiers.

The Unified State Register of Soil Resources of Russia was published in 2014 both on paper and on CD. The Register contains descriptions of soils from SGDB at the time of publication, information on soil resources of subjects of the Russian Federation, the digital model of description of soil data and the Map of Soil-Ecological Zoning with associated materials.

Soil and Geographic Database of Russia (SGDB of Russia) Project is actively developing at present. The Soil Data Center was established on the Soil Science Department of M.V.Lomonosov Moscow State University in 2016 to coordinate the work on the digital inventory of soil information, the introduction of information technologies for the collection, processing and exchange of soil data to the scientific and educational processes, as well as the algorithmization of of information technologies use. The main aim of the Soil Data Center is support and development of IS PGBD. 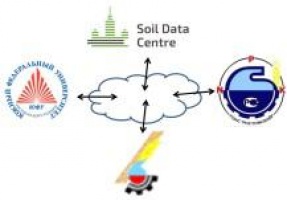 The experiment has successfully ascertained the possibility of collecting heterogeneous soil information for these areas and calculating land cover indicators in real time on a distributed network of soil centers.

Automated knowledge extraction from accumulated and organized data is the next task for Soil Data Center. This task started to be implemented in 2017 by the development of applications for the automatic calculation of organic carbon stocks and nutrients in soils (for agriculture and forestry), the normative yield of grain crops, dose of mineral fertilizers for various crops.